Over the years, Sam started really enjoying wood working. Putting hours to bring back to life a complete collection of old planes that he used afterward, collecting special tools, saws, and buying some exotic wood.

Sam looks at his amazing band saw being loaded inside the pickup of its new owner.

-I’ve built so many thing with that band saw… he says to me.

-I know… Bed for the kids, gate for them, the whole patio, cutting boards, Salty’s doll house and all the furniture that goes inside. So much more! I’m sure you’ll miss that.

Sam stays quiet. His jaws are tightening up. Usually, it means he is angry at me. But today, I think it’s because the vast majority of  his whole shop has been sold. Bought by a new woodowrker very happy of his new toys. Sam has a hard time to take it. 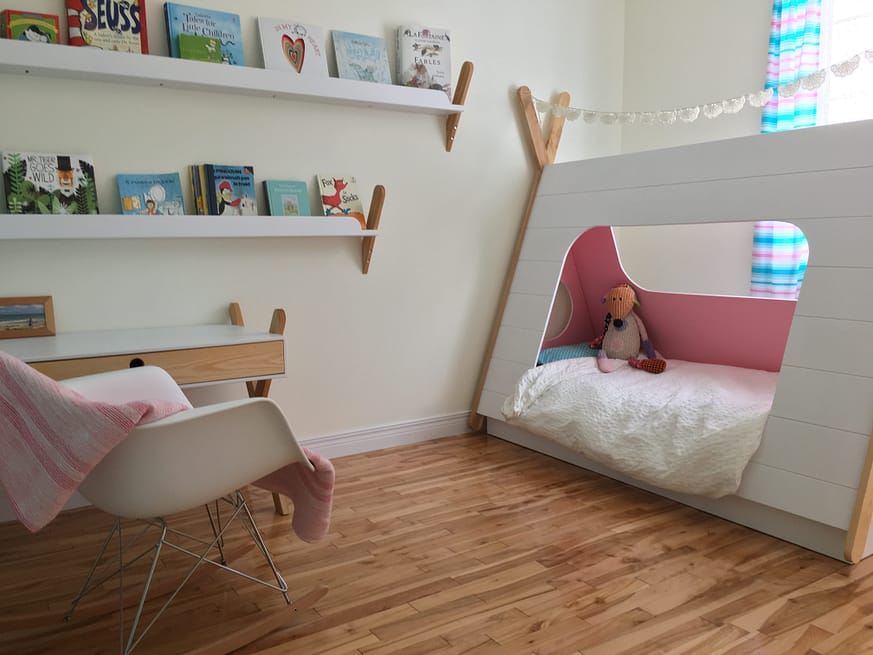 Awesome bed, desk and shelves handmade by Sam with love for his lil’ princess.

Sam passes his fingers over his eyes, pretending to remove sweat from loading the stuff in the truck. He says to the new owner:

– …it is a little crazy to say, but this is really good tools. I chose them one by one. You can do everything with them.

A lump comes in his throat.

The guy is really sweet and understand (somehow) the emotion of the moment. More than seeing his tools going away, Sam looks at a part of his life that he trully loved going away.

-Do some nice projects! Send me photos of what you do! Take good care of them…

The man starts the engine of his truck and is ready to leave. He raise his arm in sign of goodbye and screams:

-Don’t worry, I will store them carefully in my toolshed.

While the pickup get smaller in the distance, Sam cannot face the pain he feels of this ultimate stab in the heart. It is a sentimental relationship, almost romantic, that ends in a drama. That ends in a toolshed.

If you ask Sam, I am sure he will say that selling his tools was the hardest part of the project, so far.

PS: the guy was so nice, not his fault if the place he has is in his toolshed right? Hey by the way, we are still waiting to see the photos of your project! 🙂

Top photo : Sam’s shop was small and it was a tetris puzzle to work in it but it is hard to believe how much he equipped himself!

A month in the ocean... all about food