I grab the VHF at lightning speed.

-Pablo. This is Handy Andy. How can I help you?

-Just dropped my sunglasses in the water. Can you send a diver as soon as you can?

-We’re coming in an hour sharp.

One hour! Are they crazy? This is not some dollar store glasses, they are adapted to my eyes. The water here in Luperon, Dominican Republic, is not so nice. The visibility is maybe 2 feet in front of you. There is no chance I will find my glasses myself with only snorkelling gear in 17 feet even though I dropped them right under my boat. There is no chance they will find my glasses in one hour with all the current in the bay.

-I told you you needed a something to attach them Cass, said Sam.

I am so upset at myself that Sam doesn’t dare talking anymore. While waiting, I realize it’s about time we leave Dominican Republic.

It started the same way 2 weeks before: 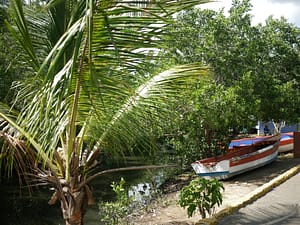 Water is much less pretty than in the Bahamas, although the country is much more lush.

Walking to the companionway to talk to my amazing husband cooking a glorious breakfast for the family after we had pretty rough seas (8ish feet waves) the whole night while making the crossing from Turk and Caicos to Dominican Republic:

-Sam… I just dropped your fishing knife in the water.

-My fishing knife? MY RAPALA? Not the one Vince gave me 3 years ago saying it would be THE knife when catching our fish on the boat? That Rapala?

-Hey…well…we don’t need a Rapala now. We haven’t catch a fish. In fact, the lines got all tangled at the back of the boat. Would you go untangle all that before we arrive so at least it doesn’t get stick in another boat line or worst, in our propeller…?

Also, the second day after we arrived, we celebrated my birthday with friends of La Metta, also in DR. Salty was so excited to show her unicorn to the other kids. (She got an egg, put in the water, bring it everywhere with you because you need to take care of said baby to come, even in the dinghy rides, grocery, etc, etc and a unicorn grow out the shell, a bit like these small sponge dinosaurs when we were young.)

-Sam did you see Salty’s unicorn after we left the pub?

-No I thought you had it?

-What do you mean I had it! Leeloo was having it I think.

-If she did then why do you ask me?

-Because we don’t have it anymore, and she doesn’t either! We lost THE baby unicorn of Salty… SHIT! SHIT!

I came back to the pub the next morning, made a drawing of the lost unicorn. No unicorn.

-She didn’t notice yet.

-I know, but she will eventually. 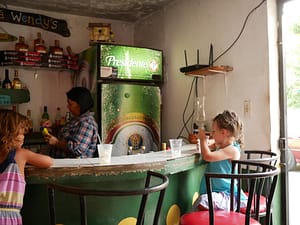 Bring a kid in a pub in DR? No problemas!

A week later, a man crossed the street and came to see me. And to my surprise, he showed me Salty’s unicorn.

-Of course not! I mean the Unicorn.

-Of course a unicorn. Why would we care about my very expensive knife when we can care about a dollar store unicorn. RIGHT?

I get out of my thoughts as Handy Andy arrives with the diver.

-You know there is almost no hopes Cass, said Sam.

-How much did they ask.

-Well I hope you realize we must pay them even if they don’t find your sunglasses Cass.

GULP. Didn’t think about that. I did not even bargain a price upfront.

-Do you think there is a chance to find them? I ask naively to Handy Andy.

“We have to pray! he says putting gas into his compressor. A lot” he adds looking seriously at me.

After 5 minutes, I was sore of crossing all my fingers in the hope we’d get lucky. The diver comes out:

-You have a good karma maam! says Handy Andy showing proudly the sunglasses. My sunglasses.

-OUFFF….time to get out of Dominican Republic. First we lose the Rapala, then we lose the unicorn, now we lose the sunglasses! What’s next?!

He turns and looks sadly at the entrance of Luperon where the Rapala fell and sits in the troubled water. And where it will remain probably for ever….

Featured image: Coast of Dominican Republic is not easy to sail to say the least. A man we met told us how much he preferred his motorbike to sailing : “I can go in any wind. No weather window to wait. That’s more like freedom to me!” 🙂 I still love his thinking although pretty unpractical with 2 kids in tow.

A month in the ocean... all about food

SICK OF SNOW. EAGER FOR SLOW