Being young, Cass over and over again a short Disney movie about a penguin – Pablo – living in the arctic and being always miserably cold.  While all his friends were playing in the snow, he was staying inside his igloo next to the fireplace, warming his butt and dreaming of warmer latitudes.  One day, he muster his courage and after a few failed attempts, he end up cutting a part of the flow, erecting a mast on his new boat and sailing up to the Galapagos.

While we were actively searching for the right name for our new boat, I realized that Cass, in front of the fireplace warming her butt, was indeed Pablo!

Short, easy to prononce and fun, we realized that no other name would be as fitting as Pablo! 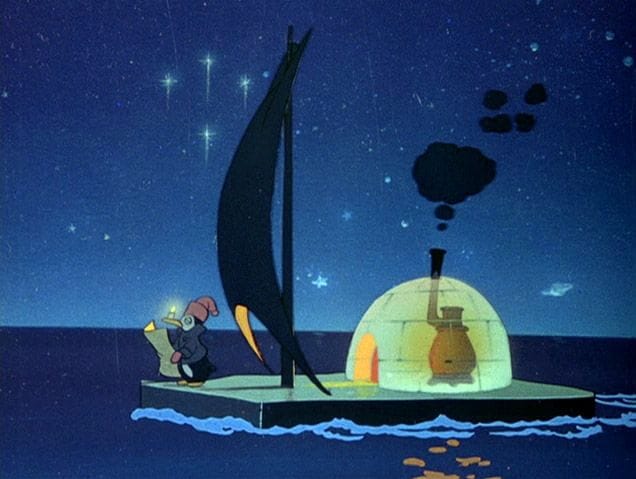 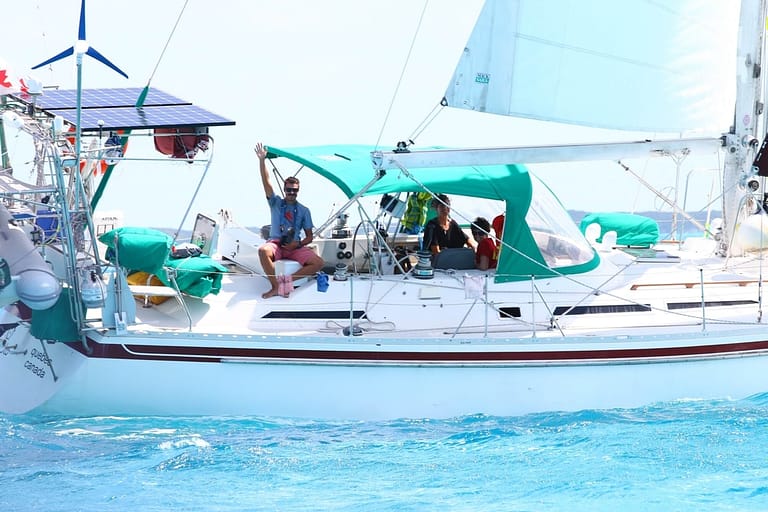 We searched low and high for our new home.  Sam had a pretty good idea of what he wanted in a boat, which although was great, translated in a lot of criteria that sometimes felt like a nightmare of constraints to Cass while shopping.  After months of searching and a few close call for purchases, we finally found Pablo, a Moody 47.  Built in the UK in 1985, it’s a center cockpit monohull, 47’ long.  We don’t know much of it’s history (and would LOVE to know more!), but we know that it’s been Godspeed, One Life, Irish Gift and Darkside before it became ours.

All in all, there’s been only 31 Moody 47 built between 1982 and 1989.  Ours is probably unique, has it has a centreboard which was somewhat of a test for Moody back in the days.  He’s not (yeah, we broke all the rules and tradition here, but Pablo is a guy!) the latest boat around, the motion at sea is very kind and has been built like a tank, with a full inch of fibreglass on the hull, solid wood inside and oversized rigging.

Finding the perfect boat is an impossible task as a boat is just an amalgam of compromises but we think we found nearly the perfect boat for us.  We love the interior layout that is roomy, the centre cockpit that keeps the young members of our crew away from the water, the layout of the cockpit that brings all the lines and winches within reach of the helm, the solidity of the construction, the attention to details everywhere….

Inside, the main living area is divided between a settee on port side and a dining table with a U shaped settee on the starboard.  The table can unfold itself to sit up to 10 persons or collapse itself to a small coffee table.  Forward is the kids’ cabin, with a bed on port side for Mateo, and 2 offset bunk on starboard where Sally sleep and the person on watch can go rest as well with the kids.  Forward in the bow, the kids have their own head (bathroom) with access to a huge sail locker where we stow all the spare lines, fenders and so on.  Going back aft, the galley is on starboard side with lots of countertop for Sam to cook and an amazing access to the engine room that sits under the cockpit while the main bathroom is on the opposite side of the boat just after the chart table.  Both the bathroom and the kitchen opens up our cabin with (luxury!) a queen bed.

On deck, Pablo has had quite an upgrade from the original specs with hydraulic in-mast furling system, hydraulic genoa furler and hydraulic winches.  The combination of furlers and clever cockpit layout means that the person at the helm doesn’t need to get out of position for all the manoeuvres, which increase safety (nobody on deck) and free up the rest of the cockpit for the kids to play while sailing.

Pablo has a massive solar arch at the back with 700w of solar panels and a 200W wind generator that keeps our batteries happy everyday, while providing a nice place with shade to hang a hammock or do the laundry..

On the system side, Pablo carries 140gal of water with a 30gal/hour watermaker that is powered by a brand new 7KW AC generator.  84 gal of diesel keeps the brand new Yanmar 75hp happy, for an approximate range of 450 nautical miles.  We have a Rocna 75lbs that dangle on 300’ of 3/8 HT chain to keep us sleeping at night, along with new rigging and new sails.

If you know more about the Moody 47 or are the lucky owner of one, we would LOVE to get in touch with you!

Send us an email!

SICK OF SNOW. EAGER FOR SLOW